Can you imagine choosing to remove yourself from the world, all its comforts, technology and loved ones to find happiness?

Add being a 22-year-old musician and university student to that mix.

He said there were a list of things you can't do while in the monastery.

"You can't eat after midday, for outsiders they think it's insanity," he said.

"The first year it was so cold I got chilblains from the floor, it was not comfortable - why would you do this to yourself?"

But Mr Hanna, of Witchcliffe, decided to put himself through that because he needed to make a change.

"I was having fun before I went, was in a band doing well, in uni and I threw it all away to try this totally different path," he said.

"I was an unhappy young person.

"I suffered from depression and was always searching for an answer."

Mr Hanna became interested in the idea of Buddhism and had a particular book he wanted to read but it was only accessible at a local Buddhist society.

"I went there [Buddhist society], found the book and then it was time for meditation," he said.

"So I went to the meditation with Ajahn Brahmand his presence changed things for me.

"It was the process of meditation - which isn't intellectual but very much directed at the mind.

"Which is where we need to find the answers, not in books or ideas, we need to see the causes of happiness within ourselves."

Mr Hanna said meditation was not easy, particularly at first.

"We are always able to look into ourselves," he said.

"But us westerners have critical minds when they start meditating they think 'I can't do this' and it makes it virtually impossible because our minds have too much momentum and at first we can't accept that.

"We have the perception that we can control everything and when we meditate we realise our minds are out of control; and that is confronting.

"The point isn't to control but to understand cause and effect. "If you can understand the causes that lead to happiness the mind naturally gravitates that way.

"But the problem is we are ignorant of them because we haven't looked.

"It isn't an easy process and takes time."

Mr Hanna's first year was all about training and he had to admit he didn't expect himself to get to the end.

"In the beginning there were three other guys starting and I thought each of them were better than me," he said.

"I thought to myself, 'Im no good at this'. I thought they would succeed and I wouldn't.

"But at the end of the year, they had gone I was the only one there."

So Mr Hanna decided to become ordained and stay on for another year.

It doesn't have to be anything special but one thing I have found is that generosity doesn't just create happiness for others, it creates happiness for ourselves

"It was a fabulous experience in so many ways, although challenging," he said.

"At the time I would say to people ''being a monk would be easy if you could take Saturday night off'.

"So even when things had improved I wanted to know if there was a way to cut the causes of unhappiness in a more permanent way."

He said the ordaining ceremony was powerful and intimidating as it was in front of a big group of people, including his parents.

As part of the ceremony, Mr Hanna had to plead for forgiveness to his parents, which was very emotional for all of them he said.

Mr Hanna was very confident when he said he hasn't been depressed since practising Buddhism.

"Sometimes when I get frustrated I stop and catch myself, and I think, 'what have I not learnt here and what do I need to let go of?'.

"The root cause of all our internal suffering is our own ignorance. I'm suffering because I don't see it correctly.

"If you have the inner resources and practice you can turn them around."

He left the monastery due to restlessness as well as "not having the patience" needed to stay.

However, he still practises certain elements like meditation every day and commits to doing a daily act of generosity.

"It doesn't have to be anything special but one thing I have found is that generosity doesn't just create happiness for others, it creates happiness for ourselves," he said.

"I have trained myself to look out for opportunities to be kind and generous.

"It's training to be a better person, like anybody I make mistakes but the effort is worthwhile.

"I think if anybody paid close attention to yourself when you are giving and see how you feel about it.

"Your level of consciousness heightens."

Since moving to Witchcliffe with his wife and son, Mr Hanna established the Busselton Margaret River Buddhist Society.

"One of the things I wanted to do was to get people in the area engaged and I thought I had been doing it for a long time and I wanted to give back," he said.

After reaching out to fellow members, it was relatively easy to set up a group who now have regular meetings and it has become a 'community of practise'.

"We are all trying to develop mindfulness and develop personal virtues," he said. 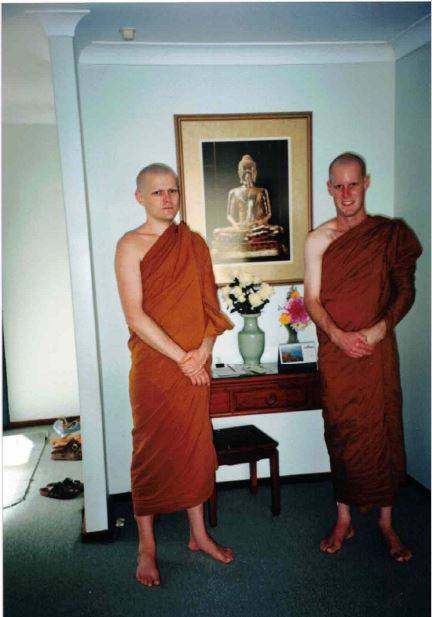 The group and Mr Hanna's ultimate goal is to be able to set up a monastery in the South West.

But the idea has barely gotten started so there is a long road ahead before it reaches fruition.

Mr Hanna said if it does happen there would be a resident monk or nun living at the monastery.

"At the moment monasteries are at capacity and there is a waiting list.

"Those that have been there 10 years will be encouraged to move on so more trainees can go in."

From feedback Mr Hanna has received, he believes he will be able to reach his goal of a South West monastery.

"My feeling is there is a lot of interest, people are reflecting on their inner world, which brings in the interest of Buddhist practises," he said.