Tom and Joan Tuffin have long been pillars of their community in the South West, and this month the pair are celebrating their 60th wedding anniversary.

The couple still remember when they first saw each other, across the hall at the P&C Ball in Pemberton.

"I saw this gorgeous looking guy, mind you, he was teaching in his first year," Joan said.

Tom was in charge of a youth camp of students from the city, while Joan was working in the state sawmill office.

For a brief moment, Joan said she had stripped Tom off of her list for swearing, after she heard him say, "it's been raining like hell since I got here".

But about six months later, the couple met again at a school ball, where Tom asked Joan for a dance.

The couple had a whirlwind four months of courting, dancing and going to 'the pictures', before Joan went on a previously booked working holiday in Britain.

Tom heard that Joan was going away, and told her he didn't want her to go.

The couple kept in contact the whole time she was away, with at least two letters sent either way, every week.

Tom says he still has the letters they sent to each other, which now make for a fun read.

Tom asked Joan to marry him through their letters, and the couple swore their vows two months after Joan arrived back from her trip.

The pair had a small family wedding, and Joan bought her dress using money she'd earnt picking apples. Instead of a big white wedding dress, she said she opted for a 'wedding outfit'.

"I was just happy to get married," she said.

After the wedding, the couple went for a honeymoon drive, with a stop at Mundaring Weir.

Their romantic night out took a painful turn, when a sharp corner on the bush track saw Joan fly out of the car and slide across the gravel on her backside.

Joan took time to recover from the injuries and afterwards the couple joked that she had to spend the entire honeymoon in bed.

Joan lost a button from her jacket that night, which she found on the edge of that same road a year later.

"Life's been full of dramas ever since," Tom joked. 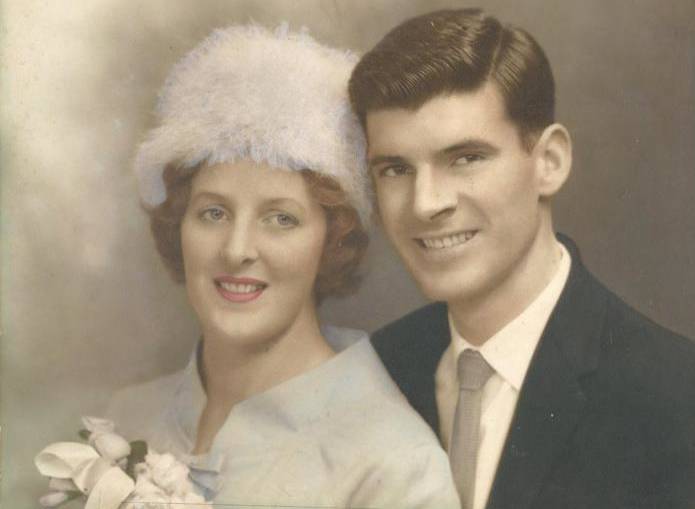 Together: Joan and Tom Tuffin had a small wedding, with Joan opting for a 'wedding outfit' over a dress. Picture: Supplied.

The couple had three children, Penelope, who is now a palliative care clinical pharmacist, Lincoln, an architect, and Meaghan is a director in the family's dermatological pathology rooms, with a PhD in biochemistry and micro-biology.

They now also have six grandchildren.

The couple said a highlight in bringing up the children, was a six months tour of Britain and Europe which they took the children on, travelling in a small campervan which they'd bought for 900 pounds.

"Each night a place to park was found, a map was produced and the five of us planned where we would go next day," Tom said.

Another highlight was when Tom was awarded a study fellowship which paid for him to study for 12 months in the United States.

The family went over to the states for a year, as Tom studied how American education catered for non-academic secondary students, and provided a report on the topic to the education department.

Joan didn't waste her time while in the U.S, and her own experiences there changed her life.

The couple spent time with an Amish community, and was introduced to their austere lifestyle.

Joan was also invited to join the West Virginia's University Campus Quilters, where she learnt traditional methods of hand quilting and piecing.

She was later selected to put together a wall hanging for Mrs Sharon Rockefeller, whose husband was Jay Rockefeller, the governor of West Virginia.

She said the piece still hangs in the Washington mansion.

When the couple came home to Busselton, Joan brought with her a quilt she'd made alongside other women at a quilting bee, where they'd sat around a big traditional quilting frame.

Once others saw the handiwork, they asked Joan to share the quilting skills she'd learnt.

"I started teaching in my own home, and I was just run off my feet," she said,

Tom was later promoted to principal of Geraldton Senior High School and the courses had to discontinue, but a group of ladies kept meeting and they named their group The Joan Tuffin Quilters.

After 38 years, the group still meet and regularly make quilts for local charities such as the hospice and a cancer hospital in India.

Joan's quilts have won many prizes and awards, and this year she was selected to display one of them in the Australasian Quilting Convention in Brisbane.

It marks the third time one of her quilts has been chosen to represent WA in the convention.

Tom was a science teacher for much of his career, who would put humour into his classes when he could, cracking jokes to his students.

"I'd always greet them with, 'good morning educatees'," he said.

Tom's career led the couple to live in several towns around the state, and they got to know a large number of people.

Some of his career highlights included winning a UWA prize in chemistry and attending International Principals' Conferences in Geneva, Helsinki and Boston alongside principals from more than 100 countries.

The couple are now enjoyed retired living, and spend a lot of their time together in the garden, where they have befriended a curious wagtail.

Tom said that after the challenges of teaching and serving on council, it's a very relaxed life-style, with time to "mellow out" together over a glass of wine in the evenings.

"There has never been a dull moment in the 60 years we have been together and we are looking forward to celebrating the occasion with the family," Tom said.